« HelpSmith 7.4 Released. Use Syntax Highlighter to Format Code in Multiple Programming Languages
How to Create a Custom Header for Your Web Help System »

We are pleased to announce the release of HelpSmith 8.0 (which you can download from our website) that provides a redesigned Image Tool allowing you to create screenshots with various annotations, such as rectangles, balloons, arrows, lines, text labels, and also control annotations for UI elements. In addition, the new HelpSmith version provides support for clickable hotspots that you can add to any image in your documentation, and other enhancements.

The redesigned Image Tool available in HelpSmith 8.0 allows you to create screenshots and add various annotations to an image, such as rectangles, balloons, arrows, lines, text labels, and also control annotations for user interface elements that can be exported into the topic directly.

Now you can easily position and rotate annotations on an image and customize any annotation object according with your needs. For example, for an arrow object, you can select your preferred arrow shape, color, specify text, and, if necessary, setup shadow settings.

Thus, thanks to the new Image Tool capabilities, HelpSmith 8.0 makes it possible for you to create comprehensive documentation in the most efficient way!

Adding Clickable Hotspots to an Image

In addition to screenshot annotations, HelpSmith 8.0 adds support for hotspots that you can add to any image in your documentation. A hotspot is a clickable area on an image that works similarly to a hyperlink in a topic. Thus, you can use hotspots to link to another topic, to an external URL address, email address, or to perform a macro. 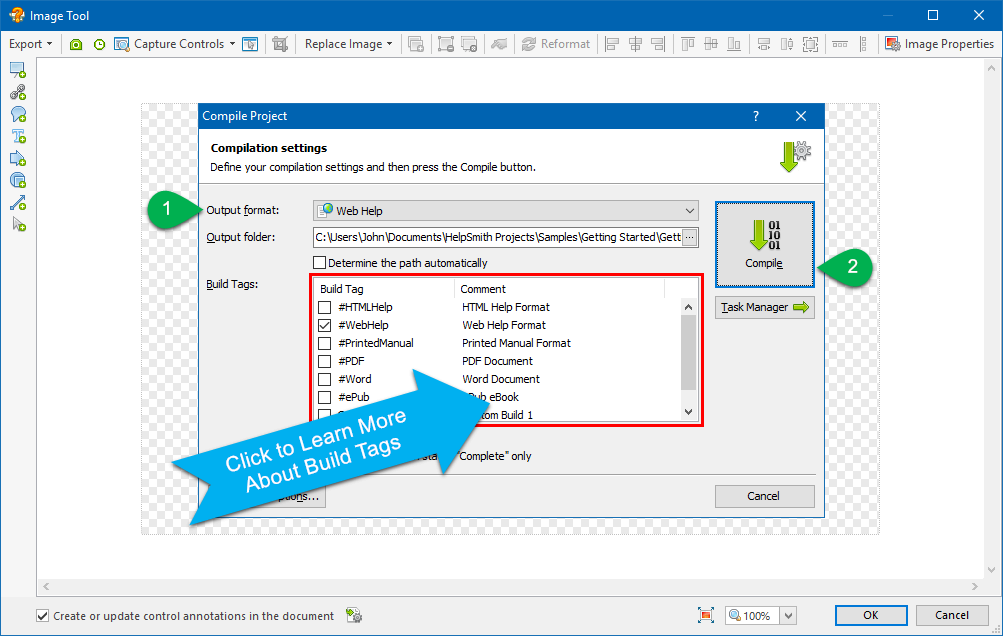 Adding a Clickable Hotspot to an Image

It should be pointed out that the Image Tool allows you to add individual hotspot objects, or to apply hotspot settings to an existing annotation. As a result, you can easily make any annotation object like a rectangle, balloon, or text label work as a hotspot.

The new Image Tool provides improved user interface that now aligns the editable image in the center of the window. Instead of using permanent borders, the Image Tool now automatically expands the image bounds by adding transparent borders if you move an annotation or another object outside of the image. 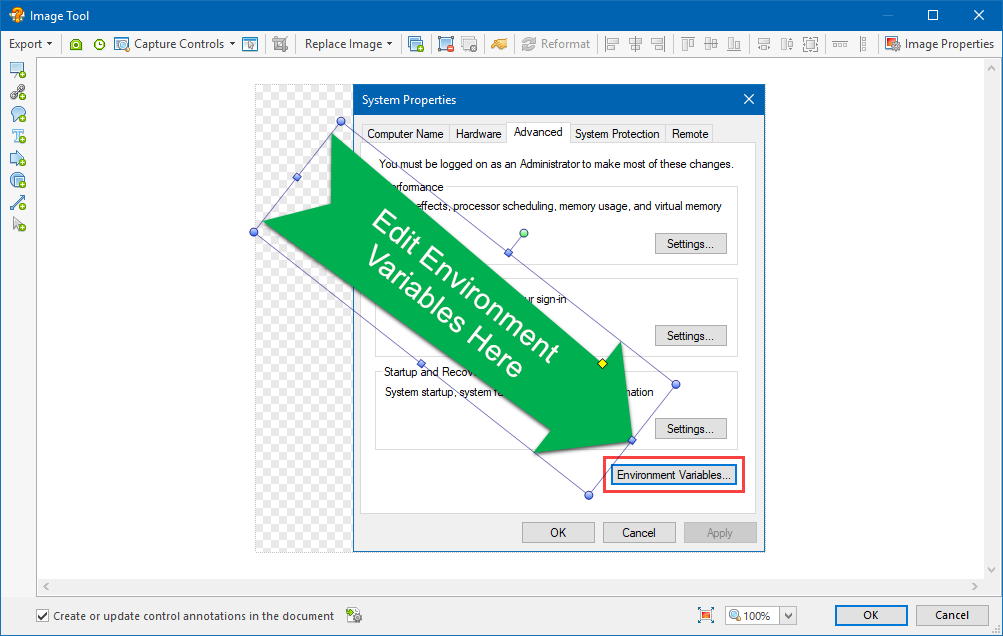 Rotating an Annotation in the Image Tool

For more convenience, we have added an extra toolbar in the left side, where you can select the objects available for adding to the image. Now the Image Tool allows you to rotate annotations and hotspots, and also provides new operations for easier object creation and positioning, such as Duplicate, Bring to Front/Backward, Flip Horizontal/Vertical, etc.

Finally, when editing annotations for a large screenshot, the Image Tool will now work faster, thanks to optimizations for better performance!

In the new HelpSmith version, we have implemented support for a vertical alignment option allowing you to specify how an image should be positioned in a paragraph line. For example, you can now easily apply Middle alignment to an icon, so it will be aligned vertically by the center of the description text.