« HelpSmith 6.1.2 is Available for Download
HelpSmith 6.2 Released. Improvements to the Image Tool, Enhanced Go To Feature, and More »

We have released HelpSmith 6.1.3 that allows you to edit annotation titles directly in the word processor, adds the ability to capture the mouse cursor with the Image Tool, and provides the option that you can use to control the start value for annotation numbering.

The new HelpSmith update allows you to edit annotation titles in the word processor, not only in the Image Tool. Thus, to update a title of an annotation, you can simply change it in the document similarly to editing the text of a description. The title will be updated in the image automatically. 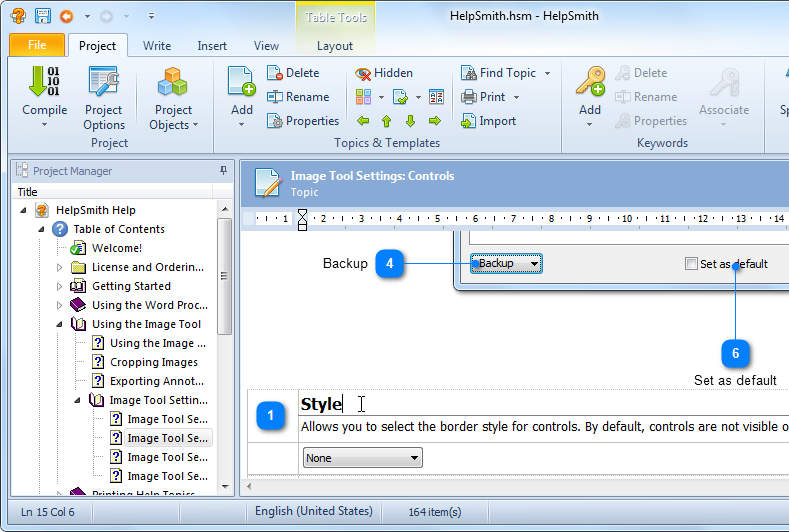 Editing Title of an Annotation

The Image Tool in Helpsmith 6.1.3 now allows you to capture the mouse cursor, or load a cursor from a file. Since the mouse cursor is added as a separate element, you can easily move it for accurate positioning on the screenshot. Also, you can customize the cursor-related shadow settings such as color, opacity, and blur radius.

If you add more than one image with annotations to a single topic, you may want to control the initial value which the annotation numbering starts from. This HelpSmith update adds the appropriate option to the Image Tool settings.

The Distribute Horizontally and Distribute Vertically functions now work better for auto-positioning of annotation elements. In addition, you can now easily distribute selected elements and also add a desired spacing between them.