HelpSmith 9.2 Released. The Ability to Add Annotations to Favorites, Presets for Various Annotation Kinds, New Options for the Command-Line Interface, and More!

We are pleased to announce the release of HelpSmith 9.2 (which you can download from our website) that includes enhancements to the built-in Image Tool which now allows you to add annotations to Favorites, provides ready-to-use presets for different annotation kinds (e.g. rectangles, balloons, arrows, etc.), improvements to the XML Source Editor, new options for the command-line interface, and other enhancements.

Add Annotations to Favorites for Reuse

The HelpSmith’s Image Tool allows you to add various annotations to images, which are a great way to complement documentation texts and to efficiently communicate information on a topic to the end-users.

In HelpSmith 9.2, you can now add annotation styles (e.g. shape, color, font, border width, etc.), which are frequently used for images in your documentation to the Favorites section, and thus reuse a preferred style for the next annotation object. 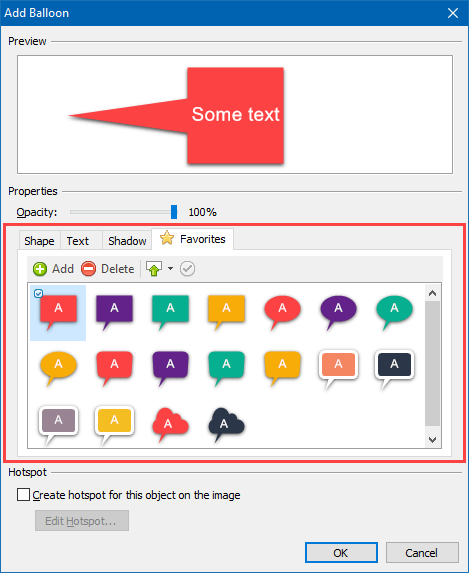 How to Add an Annotation Style to Favorites

In addition, you can set the default annotation style, which will be used when adding a new annotation object of the same kind (e.g. balloon, text, arrow, etc.).

While editing settings of an arrow, balloon, rectangle, or another annotation kind, you can now apply ready-to-use presets which are also available on the Favorites tab in the annotation properties dialog.

We have added a collection of presets with different style settings, which makes the image annotating process even easier!

Presets for Various Kinds of Annotations

Thus, while creating the style of a new annotation, you can simply use any existing preset whose settings you can customize according to your needs.

New Shapes for the Arrow Annotation

In HelpSmith 9.2, we have added two more shapes for the arrow object which you can use when you need to focus the user’s attention on an important element demonstrated on a screenshot.

New Shapes for the Arrow Annotation

As a benefit of the new arrow shapes, it is now possible to arrange text on the arrow taking up the full width of the object.

Swap Caps of the “Line or Arrow” Object

Another useful improvement related to the HelpSmith’s Image Tool is the possibility to swap the start and end caps of the “Line or Arrow” object, make the start cap the same as the end cap, and vice versa. So you can now setup properties of this annotation kind quickly. 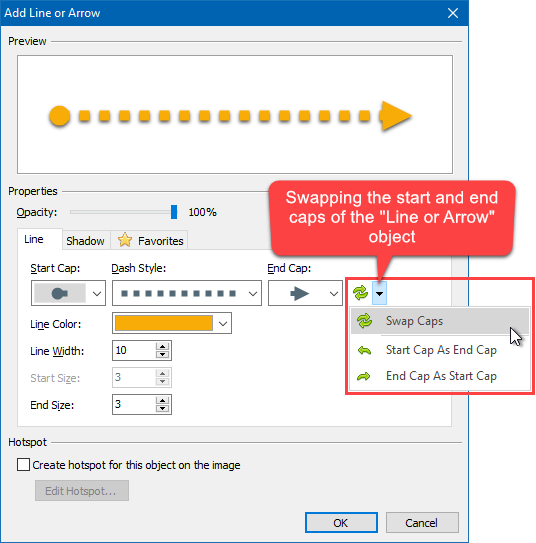 Swapping the Start and End Caps

Of course, you can also use the Favorites tab to save the style settings which you have set for this annotation kind for future use.

With the release of HelpSmith 9, which added support for the XML-based help project formats and the built-in XML Source Editor, it has become possible for a team to work on a help project collaboratively by using a version control system (such as Git/GitHub, Subversion, etc.), and also to translate a help project by editing help project’s files with external tools.

In HelpSmith 9.2, when you are switching to the topic’s XML code, the built-in XML Source Editor now positions the text cursor to the same text, and also selects the same text as in the visual topic editor.

Switching to the XML Source Editor

Thus, you can find the needed text, paragraphs, images, hyperlinks, tables, and other objects in the topic’s XML source code easily.

Remark: The built-in XML Source Editor and the ability to save a help project in the unpacked XML-based format are available in HelpSmith 9.x Ultimate and HelpSmith 9.x Terminal Server editions.

New Options for the Command-Line Interface

Many developers who create a help system for their software product use HelpSmith’s command-line interface as part of the automated build creation process.

For example, you can compile an existing help project file (.HSMX, .HSMP) and generate documentation in the target output formats, such as Web Help (.HTML), HTML Help (.CHM), or Adobe PDF, by using the following command line syntax:

It should be noted that the HelpSmith’s command-line interface allows you to specify Build Tags for the given compilation, and even re-define values of text variables which are used in the help project.

And based on the suggestions that we get from HelpSmith users, in the HelpSmith 9.2 update, we have implemented the following enhancements:

Close the Console Window Regardless of the Compiler Warnings

The /nc switch which you can use in the command line allows you to automatically close the console window provided that no errors or warnings are found during the compilation process.

Now you can also add an optional /nc=ignorewarn parameter, which means that the console window will be closed even if the compilation log contains warnings. Since warning messages do not interrupt the help system creation process, this option makes it possible for you not to break the product build creation process.

Compiling a Help Project from the Command Line

Include Topics with the Complete Status Only

When compiling a help file from the HelpSmith’s user interface, you can easily include only the topics that have the “Complete” status, and exclude topics with any other statuses (e.g. In Progress, Waiting Review, etc.) from the generated documentation.

In the command line mode, you can now also use the /cs switch (which means “Complete Status”) which enables you to include only the topics with the “Complete” status to the generated help file or document.