« Quick Overview of Conditional Compilation Capabilities in HelpSmith
HelpSmith 6.1.1 is Available for Download »

HelpSmith 6.1 provides a built-in screenshot tool allowing you to take and insert screenshots. Thus, you can now capture dialog windows or selective areas of a window.

The screenshot tool in HelpSmith properly captures windows with rounded edges and automatically clears the semi-transparent background, so you do not have to edit a screenshot with a third party editor.

Create and Edit Annotations for Screenshots

With the built-in Image Tool, you can easily add and edit annotations for UI elements such as buttons, input boxes, and for other controls shown on a screenshot.

Also, you can customize the appearance of your annotations by modifying shape, color, shadow settings, or by using one of the ready-to-use styles.

Finally, when you capture a dialog window, the screenshot tool can recognize the UI elements and prepare annotations for them automatically. Then you can export the annotations directly to the help topic where you can provide descriptions explaining what action a specific button, input box, or any other UI element performs.

Thus, you can significantly save the time that you usually spend on writing documentation for the user interface of your application. 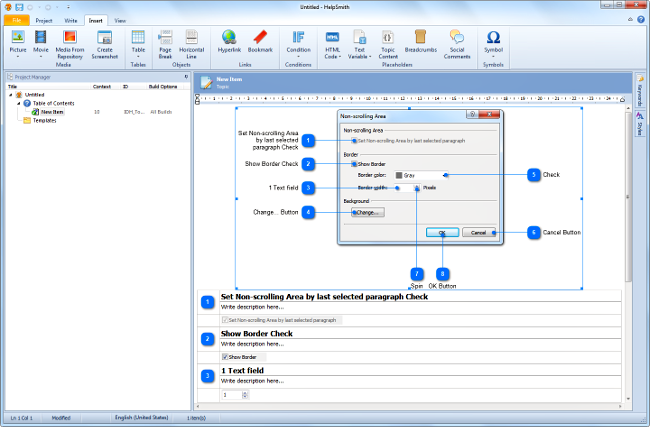 Adding annotations for a screenshot

Use the Crop Tool for New and Existing Images

When you need to cut unwanted parts of an image, you can use the Crop feature available in the Image Tool.

It should be pointed out, that the Image Tool is available when you are taking a new screenshot, and also in the Media Repository, so you can use it for existing images as well.

HelpSmith 6.1 allows you to add the comments widget provided by Facebook or Disqus to your Web Help system. Thus, to provide a commenting tool to your users, you can simply add a special placeholder to a topic template and specify a minimal set of parameters to link it with your account.

Conversion of Bitmaps that are Pasted from the Clipboard

You can download the latest HelpSmith version by visiting this link.