« How to Create a Custom Header for Your Web Help System
HelpSmith 8.2 Released. The Ability to Find and Remove Unused Media Files, Improvements to the Import Feature, and Other Enhancements »

We are pleased to announce the release of HelpSmith 8.1 (which you can download from our website) that adds support for the Undo/Redo and Clipboard commands to the built-in Image Tool, includes an easy way to start a new help project with the desired Title and Language settings, and also with the option to create default topic templates automatically, includes the ability to edit a media reference, text variable, or color code in the built-in HTML editor, and also provides better support for High DPI displays.

The Image Tool with Undo/Redo Commands

In HelpSmith 8.1, we continue improving the new Image Tool that makes it possible for you to capture screenshots and add various annotations (balloons, arrows, text labels, etc.) to images in your documentation without the need for an external image editor. In this update, we have implemented support for Undo and Redo commands, which makes editing annotations, hotspots, and other objects on an image even easier! 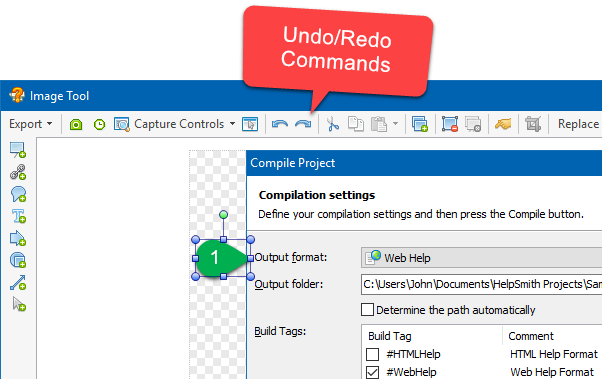 Undo/Redo Commands in the Image Tool

For example, while editing an image, you can now cancel or repeat any undesired actions, such as adding a new annotation to an image, moving or resizing an object, editing properties of an annotation including text, color, shadow settings, cropping the image, etc.

Also, the Image Tool now provides support for Clipboard operations allowing you to copy and paste selected annotations and other objects. For example, you can now easily copy one or multiple annotations (such as arrows, balloons, text labels, etc.), and paste them to the same image, or, if necessary, even move them to another image. 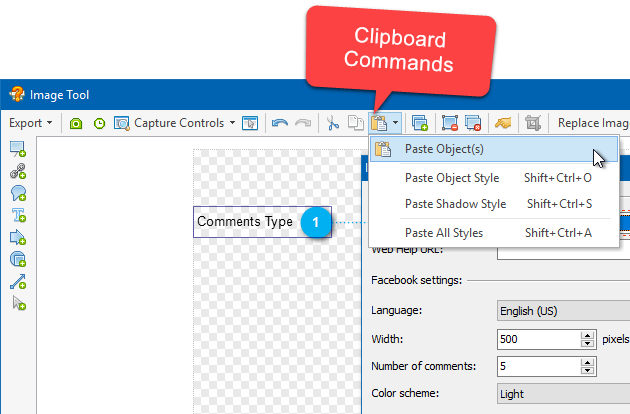 Copying and Pasting Annotations on an Image

Additionally, the Image Tool allows you to copy an annotation object and then paste its style (for example, shape color, outline color, outline width) and/or shadow settings to other objects. Thus, the new HelpSmith update simplifies the process of creation a single style for multiple annotations on the image.

In this HelpSmith update, we have added a “New Project” dialog that allows you to specify the Title and Language attributes when creating a new documentation project. With this option, you can easily set the desired language that will apply to the project’s Language setting, and also to the default text styles (Heading, Normal, etc.), so you will not have to edit the text styles even if your project is written in a language different from the default language defined in your Windows Locale settings.

Optionally, you can also create a new help project with default templates for different output formats, such as HTML Help (CHM), Web Help, Printed Manual, and ePub eBook, without the need to add each template manually.

When you edit the code of HTML insertions in a topic, or the code of an HTML-based template for the Web Help layout, the built-in HTML Editor allows you to easily insert an image from the project’s Media Repository, text variable, or color code that you can pick via the Color dialog.

In HelpSmith 8.1, you can now also edit properties of such an object in HTML code. For example, it is now possible to change the image file specified by a media reference, replace a text variable, or change the value of the color code.

The new HelpSmith version includes a number of improvements related to the compatibility of the help authoring tool with modern Ultra-HD/4K monitors and also Per Monitor DPI Awareness that we introduced in one of the previous HelpSmith releases.

While the HelpSmith’s main window and all dialogs are automatically scaled to the current monitor’s DPI and scale settings, in HelpSmith 8.1 we have also added scalable icons for different DPI modes to the Project Manager tree, Keyword tool, Media Repository window, and to the HTML Includes editor.