We are pleased to announce the release of HelpSmith 7.3 (which you can download from our website) that provides support for High DPI displays, adds the Zoom feature to the built-in Word Processor and Image Tool, the ability to import and split MS Word documents into topics automatically, the possibility to generate native .DOCX files, and many other enhancements.

In HelpSmith 7.3, we have done a huge work to implement support for High DPI display mode which is commonly used with modern high-resolution (Ultra-HD/4K) monitors nowadays. Thus, HelpSmith is now a DPI-aware application which means that its user interface is automatically scaled according to the screen resolution and scale options that you can specify in your Windows display settings.

It should be pointed out that HelpSmith is also compatible for usage on a multi-monitor system where you can setup different screen resolution and scale options for each monitor. In such a case, any window including its controls, images, and fonts now also scales according to the screen settings of the monitor on which it appeared or has been moved to. 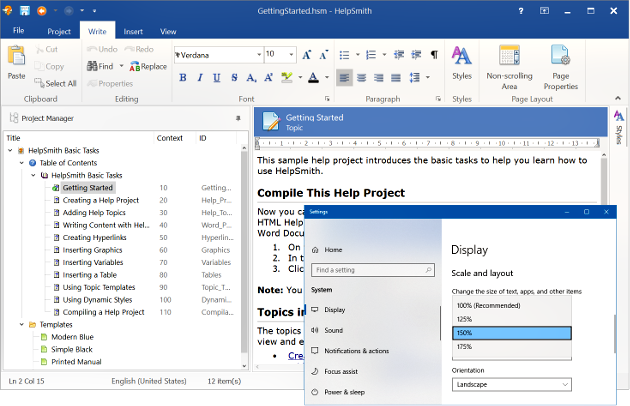 The Zoom feature in the Word Processor and Image Tool

In this update, we have also implemented the Zoom feature for the HelpSmith’s Word Processor and for the built-in Image Tool that you can use for quick screenshot creation and for adding annotations to user interface elements.

The Zoom feature in the word processor allows you to scale the document for your convenience while editing the content of help topics.

Scaling the Document for Comfortable Editing

Similarly, in the Image Tool, you can now use the Zoom feature to change the scale of the image for more comfortable working.

Besides from updating HelpSmith’s user interface, we have also revised the help file and documentation formats that you can produce with HelpSmith for compatibility with High DPI displays. While modern browser applications, PDF viewers, and MS Word properly display a document on any screen resolution and scale settings, there are some known issues with displaying an HTML Help (CHM) file on the High DPI mode.

Despite the widely-used help formats, such as HTML Help (CHM) and Web Help (browser-based documentation) are both based on HTML which is displayed by a browser, on the screens with High DPI setting (for example, with the scale ratio 150%), the HTML Help (CHM) viewer does not properly scale images, horizontal lines, tables, paragraph indents, and document margins in case their size is specified in pixels.

The new HelpSmith 7.3 update provides a solution to this HTML Help-related issue, so when you are creating a CHM help file, Web Help system, or documentation in any other format, you don’t have to worry whether you are specifying values in pixels or in any other measures – the images, tables, clickable hotspot areas (that are automatically added to your screenshot annotations), and any other objects will be properly displayed on the screens of your end-users. 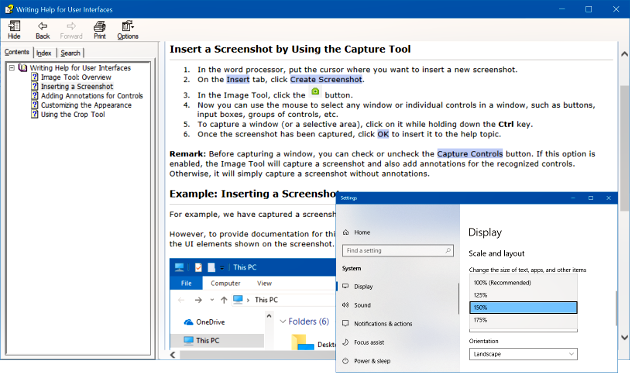 Importing and Splitting an MS Word Document is Now Even Easier

HelpSmith 7.3 provides an enhanced capability to import MS Word documents. Now HelpSmith can recognize the document’s structure (that can include chapters, sections, sub-sections, etc.) and automatically split such a document into multiple topics that will be added on the corresponding outline levels according to the original document’s structure. 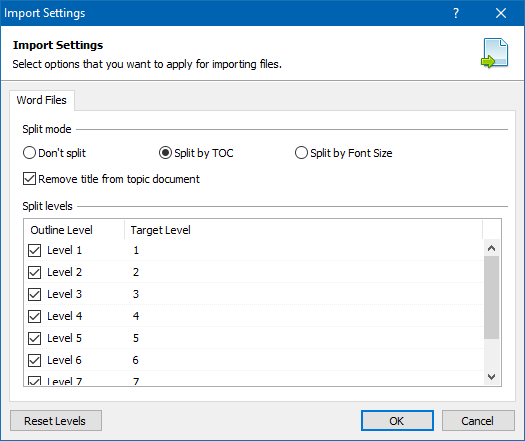 Splitting an Imported Document into Topics by Table of Contents

Additionally, since the structure of an MS Word document is defined by Outline Level values of the heading paragraphs, HelpSmith allows you to re-define the target outline levels during the import process. For example, by specifying custom target level values, you can import specific sub-sections into topics that will be added on a lower level; or, if necessary, you can disable one or more sub-levels, so the content of the appropriate sub-sections will be imported directly into the topics of the parent level.

If necessary, you can also use the option to import and split a Word document into topics by specifying font size values of the heading paragraphs manually. This option was implemented in a previous HelpSmith update and is still useful in case the document that you need to import does not have a Table of Contents or specified outline levels for paragraphs.

The new HelpSmith update allows you to compile an MS Word document and save it to a .DOCX file. While the previous HelpSmith versions allowed you to produce MS Word files with the .DOC extension, in fact, the file was saved using the Rich Text Format (RTF). 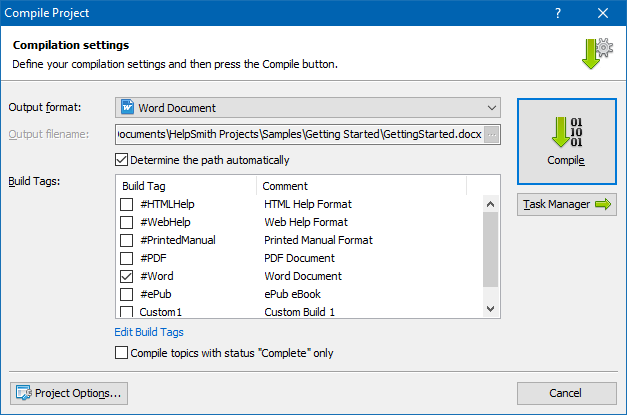 Since HelpSmith 7.3, you can now specify any of the following file extensions for saving your Word document: .DOCX (used by modern versions of MS Word), .DOC (Word 97-2003), or .RTF (a standard format supported by most word processors). Thus, the document will be properly saved into the format corresponding to the specified file extension.

The Possibility to Pick a Color Directly from the Screen

When specifying a custom color for a font, background, border, or for any other object by using the Color selection dialog, you can now easily pick the color that you need from anywhere on your screen. 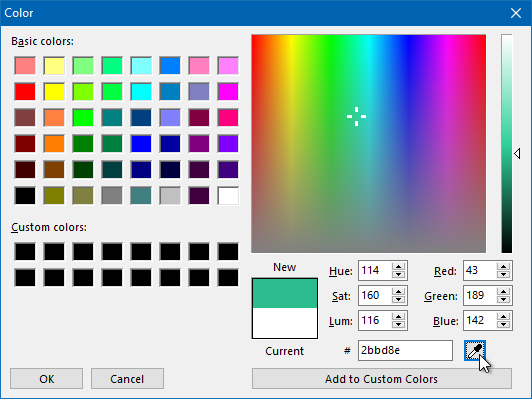